VIA Visiting Installation Art is a cultural project encouraging rebirth and recovery, conceived by entrepreneur Lorenzo Lombardi and photographer Valentina Angeloni. The project has been realized with the collaboration of store owners on Via della Spiga.

The idea is to use the storefronts now empty due to the pandemic as exhibition spaces for art works and installations, so to transform the void into an opportunity for creativity while also communicating a message of artistic vitality.

VIA is a Milanese project. Not just because it is planned and curated by Milanese people, or because it starts on Via della Spiga - one of the most “Milanese” streets in the city - but above all because it epitomizes the ability of Milanese to roll up their sleeves during times of difficulty and draw on the creative resources the city has always relied upon.

The contemporary art show Viavài (“coming and going”) launches the project. It aims to be an outdoor exhibition for the city when many museums and galleries often remain closed. The works exhibited in the storefronts, which are not accessible to the public, are clearly visible from the street and described by vinyl captions placed on the windows – that are legible from a safe distance.

The Viavài exhibition is kindly hosted and produced by the owners of the stores located on the final stretch of Via della Spiga, between Via Borgospesso and Via Manzoni. The owners of these spaces share the common desire to see a new cultural revival in the neighborhood while waiting for the “coming and going” of passers-by, both Italian and international, which once animated the street and its surroundings, to resume.

Transforming the road into an extended exhibition space, Viavài is a fluid exhibition format, both because the artworks are displayed in different shop windows and because it is constantly evolving. The shops are able to join or leave the project depending on the availability of their spaces, and they can also integrate or replace the artistic interventions over time, in coordination with VIA’s curatorial proposals.

Gianluca Malgeri and Arina Endo exhibit their work for the first time in Milan: a selection of sculptures that investigate the theme of the playground. The project, which is very dear to them, started in 2006 in Denmark and is still going on today in various forms, from drawing to sculpture, passing through installation. Playfulness and imagination are explored in a poetic and gentle way in this series of copper sculptures, monumental yet only hinted at. Like metal origami, these works trace both real and imaginative forms. They seem to enclose all the grandeur and insignificance of human nature at the same time, while recalling our childhood as if to bring out the best in each of us. The sculptures on display were partly made for the latest personal exhibition of the artists at Magazzino Gallery in Rome (Untitled # 7, Untitled # 2 and Little Babbel) and partly reassembled on site for this exhibition, intervening on previous pieces, still coming from the collection created for the Roman gallery. 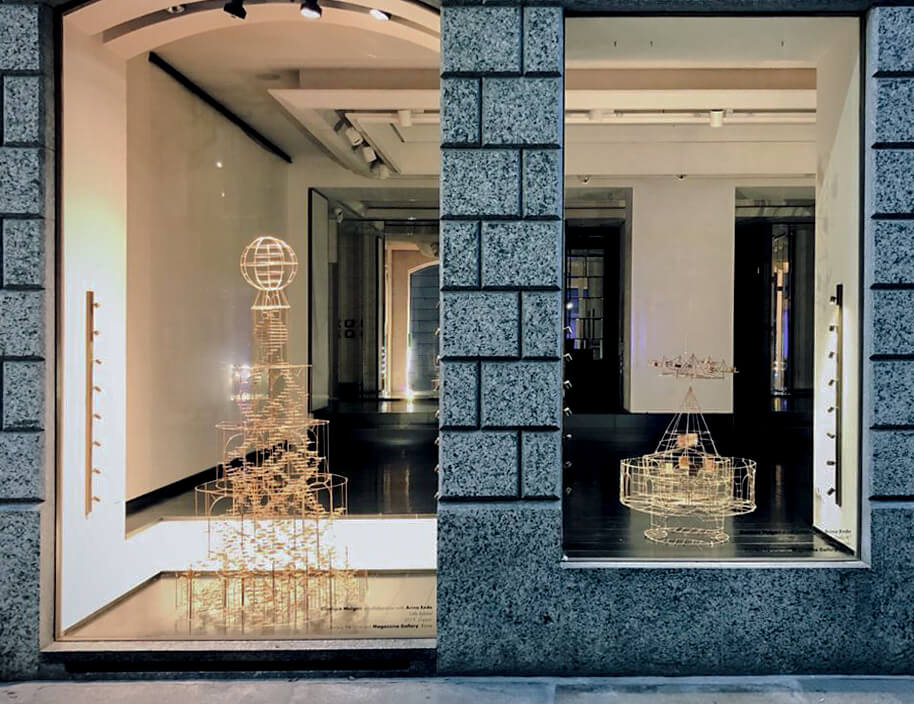 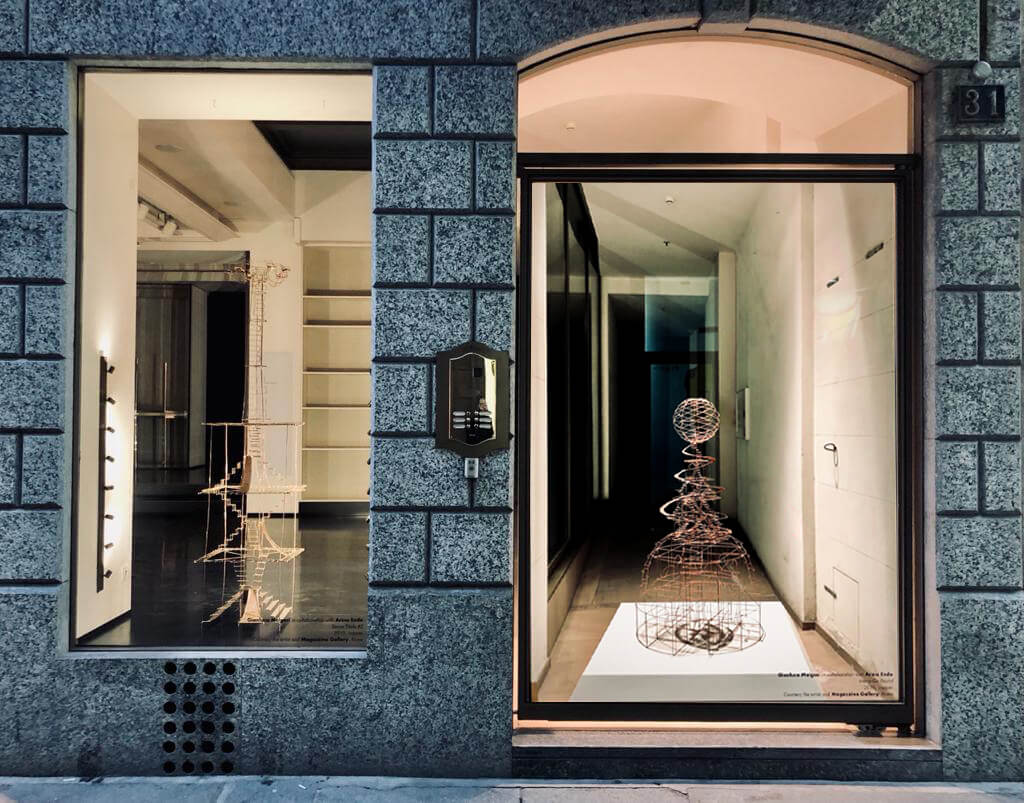 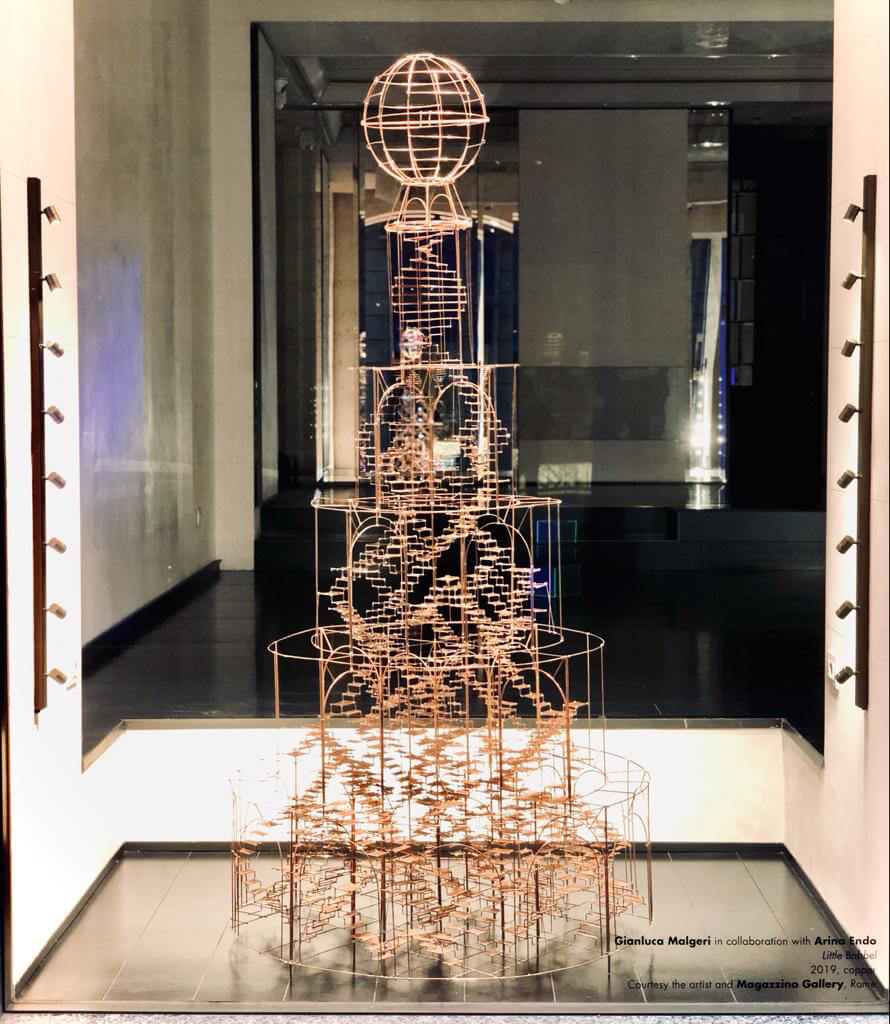 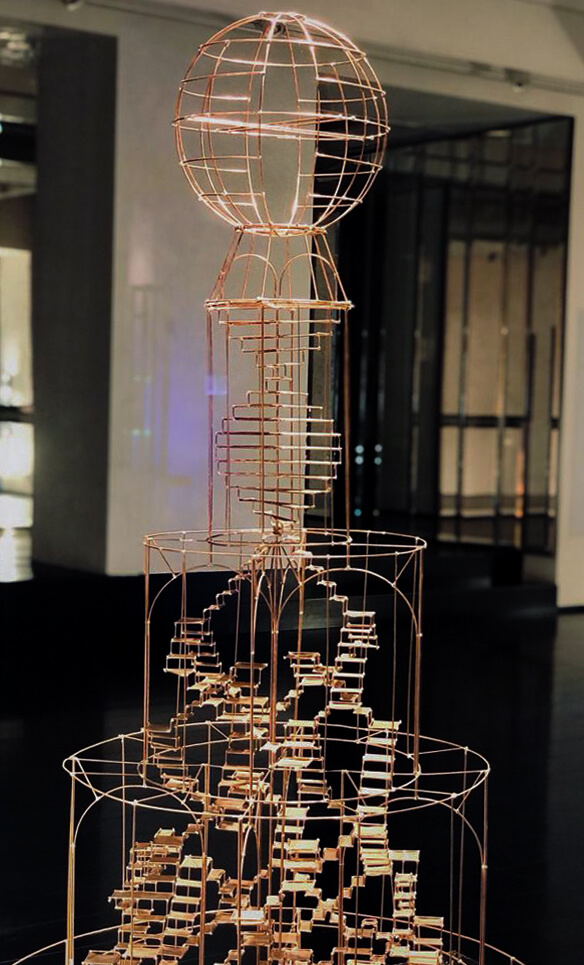 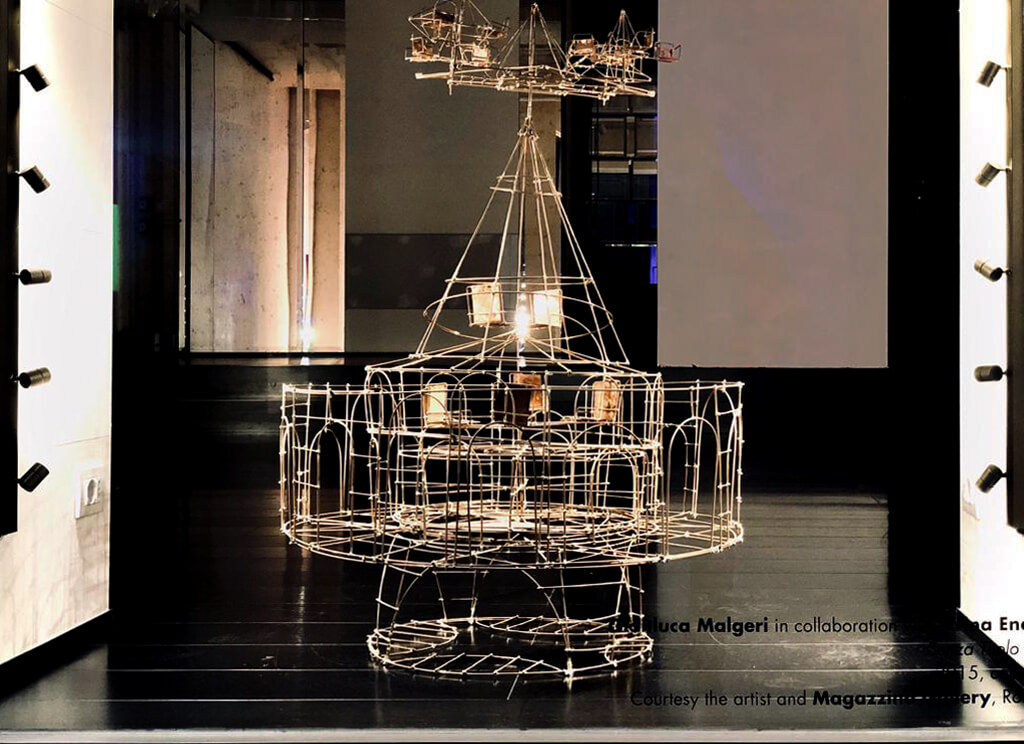 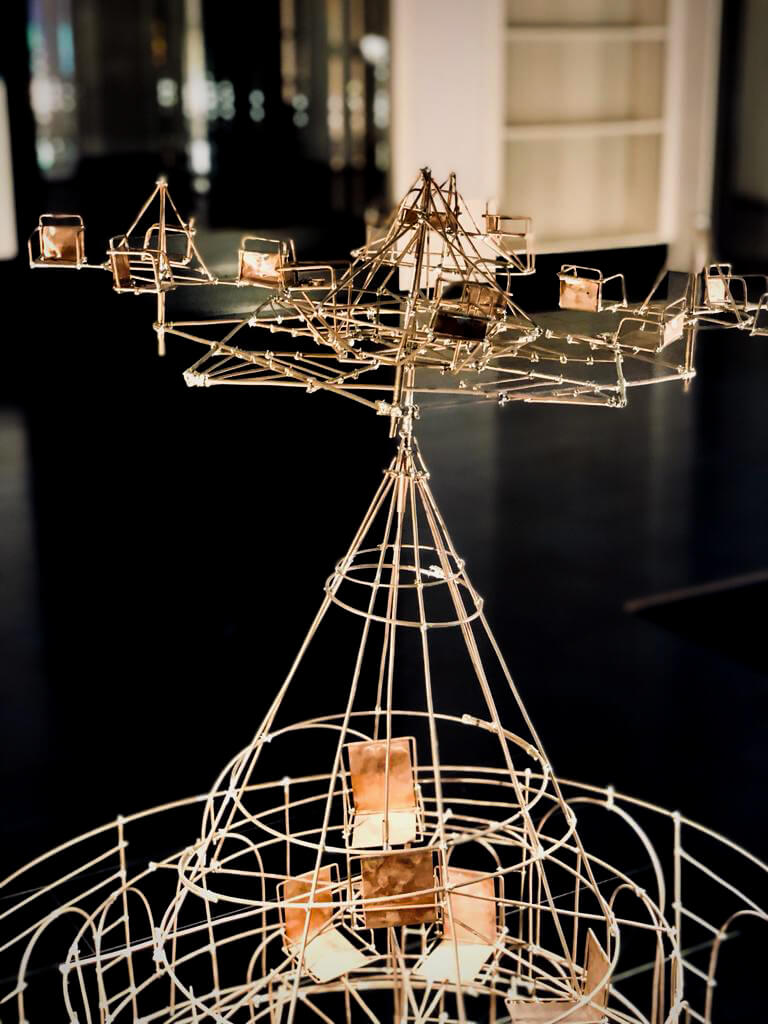 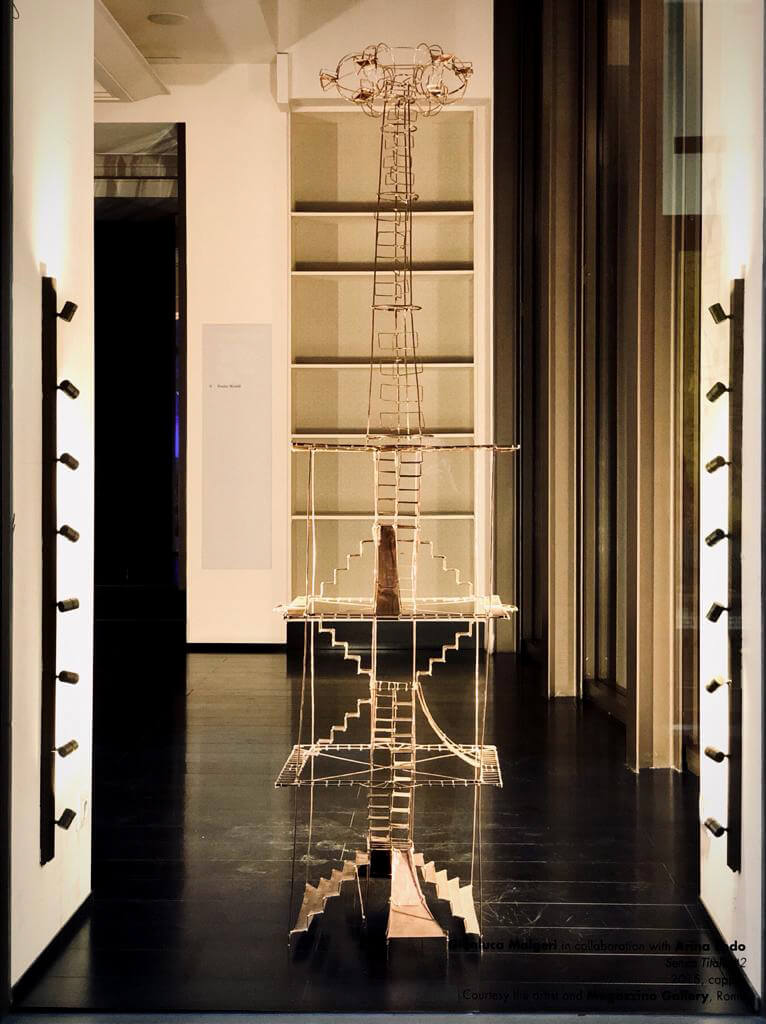 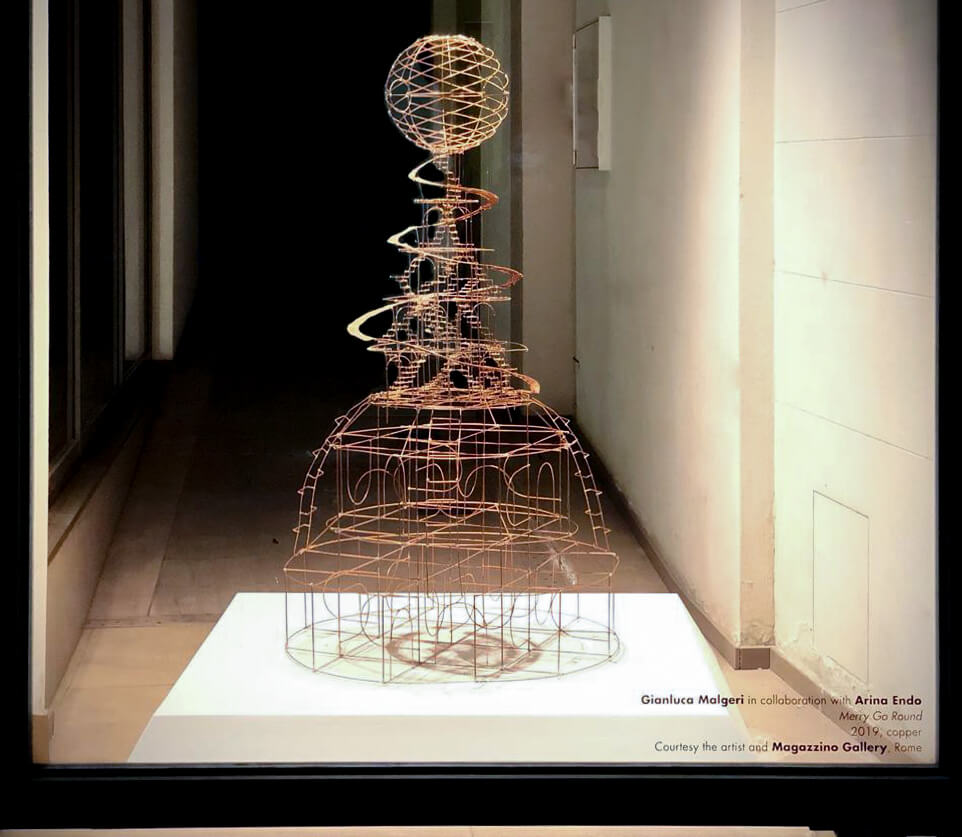 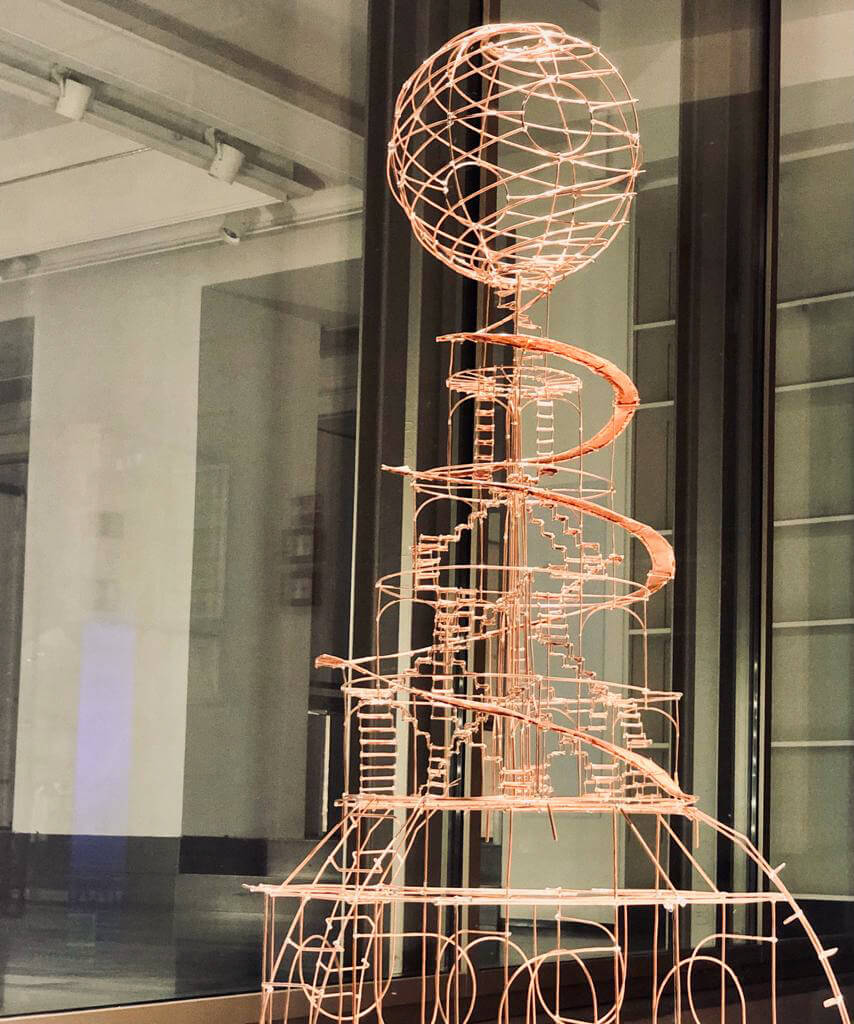